Are there permanent features in today’s World?

This post includes a video of the first panel, on .. on 6 July 2018, of the Rencontres économiques d’Aix-en-Provence 2018 on “the World’s metamorphoses”, organized by the Cercle des Economistes. All sessions of the Rencontres can be watched by going to the rencontres’ website.

Are there permanent features in today’s World? Written introduction to the panel 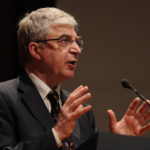 Change is heralded everywhere: in the global political and strategic environment and the transformation of the global and regional balance of power, in the institutional structure, in the regional and global alliances, in goods and services, in the nature of labor, etc. It is therefore fascinating to take the unusual route of asking what does not change, what is “permanent”, and to ask whether there are strongholds on which to base our thinking about the future. This is obviously a huge subject, one that should mobilize the best philosophers … rather than the usually modest economists represented in the Cercle. But I’m sure that our remarkable panel will stand up to the task. In guise of introduction, let me, instead of a theory, ask a few questions and invite panel comments on them.

Is globalization permanent? Well, it may be a question of definition. If by globalization one defines a specific world order welcoming the liberalization of flows and exchanges between nations, this of course depends on high and low politics and politics is unlikely to sustain permanent solutions. This actually may give a clue to answering this panel question: everything that depends on politics is unlikely to be permanent, though fundamental features of politics itself are. And indeed, current debates do not bode well for the future of the current organization of globalization, and there may be setbacks. Do we need to recall the first setback to globalization, already largely influenced by responses to migrations, in the first decade of the 20th century? Or do we need to insist, as the American President seems tempted by a multiplication of trade skirmishes, on the permanent misunderstanding about trade that make non-economists (and even some declared economists) argue about trade out of a concern about trade imbalances and see protection as gaining an advantage over trade partners and the trade game as meeting tariffs with tariffs: British economist Joan Robinson’s was already noting in 1937 that “it would be just as sensible to drop rocks into our harbours because other nations have rocky coasts”[1]. Even almost a century earlier, the French economic pamphletist Fréderic Bastiat joked in 1845 that French parliamentarians, given their position on trade, should prevent by any means the light of the sun of entering in houses because it unfairly (it is free!) competes with candle producers[2].

But if de-globalization can, at least partially, occur, interdependence is much more likely to be permanent. One cannot really imagine nations (or political entities) to maintain full autarky given the current state of technologies. And with interdependence, comes the inescapable tension between cooperation and conflict. That one is likely to be permanent, and no institutional progress will put a final end to it. To some extent, it has always been illusory to believe that the institutions put in place after World War II were installing a new, permanent world order. These institutions have remarkably adapted to various evolutions and crises. But they ultimately rest on political consent. Current difficulties in managing globalization may point to a failure to anticipate that more than ongoing adaptation was needed.

Actually, while that tension between cooperation and conflict is the engine of many actions and evolutions, it is hardly recognized as normal. If it were, interpretations of events might be a bit more guarded. May be there is too much belief in institutions, to the point that their political foundations are forgotten and taken for granted. Using the word “crisis” to describe ongoing tensions is entertaining but not necessarily helpful. The more interesting question is how to avoid costly ruptures along that ongoing process. This provides one way to look at European integration. Despite the many stumbling blocks, it has been a remarkable process about managing interdependence and sharing sovereignty between countries jealous of their autonomy.  It is easy to be distracted by the recurrent crises and ignore the fundamental problem, actually: the fact that the objectives funding the process initially (namely reconciliation, containment, and reconstruction) have become obsolete because they were reached, so that no guiding idea provides a strong political stronghold to the process. The European project is kept implicit: why should European countries further share their sovereignty? Why should they move toward more federalism, or to the contrary, return to more national autonomy? Having no political agreement on the why is indeed ominous. This suggests that short-term, technical solutions are not going to solve the problems – unless one believes that that process in itself can generate the political foundations. Are the existing institutional structure, path dependency, and desire to muddle through creating high politics? Maybe.

What are these fundamental features of politics that we can safely consider as permanent? Well, we should again leave that question to specialists, but a few things readily come to mind, among others. All are linked to individual and collective behaviors. The most potent one is power-plays. This seems to be the driving force for many breaches in established practices, and also governs the dynamics of inequality. Another one is the power of incentives, and its implications (notably the incentive built in any rule to find ways to get around the rule, which is how innovation flourishes). Yet another one is the collective tendency to believe that “this time is different” and build the seeds of oncoming crises, a failure to anticipate that collective behavior is unsustainable. This is impressive in the recurrence of financial crises, which suggests that, even though all of them differ very much from one another, there is something permanent there, well described already in Clément Juglar’s 1889 account of economic cycles in the 19th century.  He admirably described the moral hazard involved in prosperity: it invites complacency. When things go well, the belief settles in that they will continue to go well, and too much risk is accumulated. Does it ring any bell? No ex-post technical solution derived from past crises is likely to address that fundamental feature. This also suggests that an everlasting concern in society is about risk management, crisis prevention and responses to crises.

This is why the debate on the End of History, that started with Hegel and was revived by Francis Fukuyama (who actually participated in these Aix Rencontres) after the fall of the Berlin Wall, was always surprising. History is unlikely to end as long as there is politics. In fact, History itself, seen as a succession of crises (not only economic and financial, but also wars) is quite likely to be…permanent.

What are the practical implications of all this? Well, for one, never believe that anything is permanent. Permanence – or at least sustainability for a period of time – needs to be constantly built. This construction requires attempts to adapt the institutional structure to constantly both address current challenges and lock political consent, to strengthen that structure and complete it. In today’s world, for example, it would seem important to institutionalize values, principles and practices regarding migrations, which, beyond the political sensitivity, are a forgotten dimension of the governance of globalization. But rules and institutions are always the expression of a contingent political agreement. This can indeed last a long time, but unless their relevance and usefulness are explained, shared and owned widely, and adapt over time, they will ultimately be challenged. This is what democracy is about. But is democracy itself permanent? In the financial arena, there should be warning signals each time the situation becomes bullish. And regulators should consider that any piece of existing regulation is bound to very soon become obsolete, because another permanent feature is that regulations create incentives to make them become obsolete.

Another implication is to depart from an overwhelming tendency to see the World in positivist terms, determined or even pre-determined by science. Yet, it is driven by power and deliberation. Technology has been a major engine of change, it alters political processes, but it does not change the fundamentals of politics. The world is not deterministic, and permanence (which also connects with sustainability) is not a technical result, but it is a social and political process. This also invites to rethinking the role of science – notably social science and economics – in Society. Nassim Taleb once cautioned[3] in a rather extreme aphorism: “asking Science to explain life and vital matters is equivalent to asking a grammarian to explain poetry”. This of course does not invite ignoring the power of scientific explanations, but it reminds us that there are always other forces than science-based logic and reason that drive human actions.

Let me end with a couple of additional, easy questions for the panel: Are nations permanent?  Is Capitalism permanent (a recent book describes the advent of a form of capitalism without capital)? And, of course, one question for the Cercle: is economics permanent – or rather is the economists’ propension to err permanent…?